Step onto the dance floor and get your groove on in Disco Danny! It’s time to relive some 70’s music- Play the Disco Danny slot from NetEnt for some funky entertainment. The slot features 3×3 reels grid that has a total of 5 paylines, multi-level free spins, Golden Multiplier feature and other add-ons to look forward to.

NetEnt has taken inspiration from the retro-style nightclub to design the Disco Danny. With bright, flashy discotheque lights illuminating your screen and lit background music to groove on, you will definitely go back in time!

The super cool slot is accessible from €0.10 to €250 per spin. This classic game has low-paying symbols being represented by single, double and triple BAR icons. Among the medium-paying symbols, the Lucky 7 and stylish Roller Skates icons take place. Furthermore, the Disco Danny is himself named the highest paying symbol with five of them.

Win lines on the Disco Danny slot pay from the first reel at the leftmost side of the grid and move to the rightmost side, i.e. to the third reel. You need to land three matching symbols from left to right to form a winning sequence.

Are you keen on retro slots? Keep reading our detailed Disco Danny slot review to know more about.

Although Disco Danny is a simple slot with fewer symbols, the game still comes with the potential to help you gain rewards up to 4500x your bet. Thanks to the following added features that help make the game more exciting and rewarding, Disco Danny is going to be a game that you will spin around!

Disco Danny features two different scatter symbols, which are a golden disco ball and a silver one. Both these balls help you activate free spins. Also, during the free spins rounds, each Golden ball can give you multipliers up to 50x.

Unfortunately, there is no Disco Danny wild symbol in the game. However, the regular symbols themselves pay lucratively. The lowest paying symbols of the game are single, double and triple BAR ones. If you land any combo of these three symbols, you get a reward of 0.6x your stake. Regarding this, the combo of three single/double/triple BARs individually pays you 1x, 2x and 3x your wager respectively.

The Lucky 7 symbols and the roller skates are the mid-paying symbols. Three of the Lucky 7s offer you 4x of your bet while three roller skates symbols give you a payout of 6x. As mentioned, the Disco Danny is the highest paying symbol of the game. This icon offers scattered pay when you land it anywhere on the reels. For three of Disco Danny symbols on the reels, you can earn up to 100x your stake.

Both Golden and Silver balls come with free spins. You can trigger them in two methods. The catch here is to land 1 Golden ball + 2 Silver balls or a total of 3 Silver balls to activate the free spins feature. Once triggered, you get 3 free spins.

During the free spins bonus rounds, all the regular symbols disappear from the reels. You will only see Golden Balls landing on the reels. These Golden Balls form various winning combos and ultimately become sticky to remain attached to the positions they land on for the entire bonus period.

Each Golden Ball on the reels has a varying multiplier capacity ranging from 1x to 50x the total stake. If disco balls stop appearing during the free spins rounds, the feature completes here. However, if more disco balls combos keep appearing, the free spins increase accordingly.

Furthermore, the game includes five levels of free spins that come with progressive multipliers. The multipliers start from 1x and move on to 2x, 3x, 5x and end at 10x level. So when any Golden Ball lands to complete the game field, their values are totalled to multiply using the level multiplier. Once this calculation finishes, you can access to the next multiplier level. This way, you can reach a 10x level to earn up to 50x your total stake.

Disco Danny slot is a highly volatile game with an average RTP rate of 96.04%, which is around the average. While the game might seem simple to play, it still brings you the opportunities to win massive rewards.

Check out our list of Disco Danny online casinos and access any of those platforms to try it out. These are experienced casinos that are known to host authentic games on their platform to assure fair gaming. Hence, we suggest you try the variety of gaming range along with Disco Danny slots.

Accessing a demo version of any game is extremely necessary to understand its working and the features it comes with. Disco Danny demo is no different. While we find the game elements somewhat interesting, we are not sure if all players will be into classic slots. So it is better for players to access the slot for free first and then play for real money. When accessing Disco Danny slot play for free, you will understand the add-ons included in this game such as scatter symbols, free spins, multipliers and the rewards they bring along.

NetEnt has given a proper touch to the classic game of Disco Danny slot with revitalising design and background music. The game takes you to the 70s era and is playable on multiple devices at various online casinos.

While most of the classic games are mundane and feature fewer elements, Disco Danny slot is somewhat unique from the rest. It has some add-ons like Golden and Silver balls which cascade into a multiplier and free spins, giving engaging gameplay overall.

The payouts are also lucrative in this slot with RTP standing tall at 96.04%. All in all, you hold the chances of winning up to 4500x your stake in this game.

When was the Disco Danny slot game released?

Disco Danny slot is scheduled to release in the September month of 2020.

Is the game accessible on mobile devices?

Yes, you can access and play the game on your smartphone as well as tablets.

What are the maximum winnings one can earn from playing Disco Danny?

You can win up to 4500x the total wager you make during your entire game.

Which is the highest paying icon among the regular symbols?

Disco Danny icon is the highest paying symbol which presents with 100x your wager for three of them on the reels. 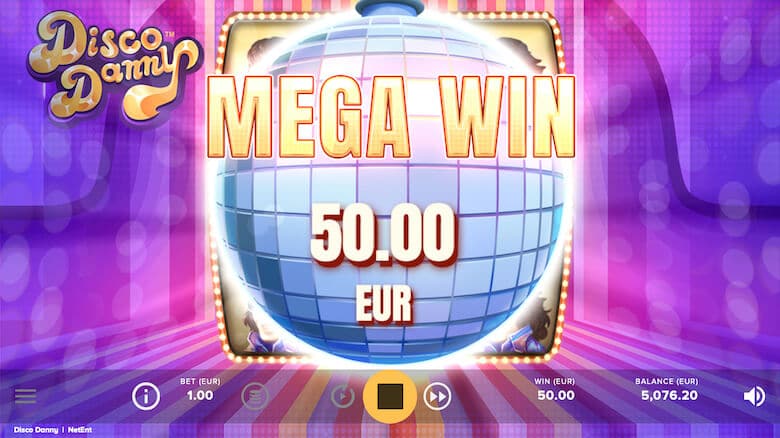 First of all, you better check out our long list of online casinos to play the Disco Danny slot game. These casinos allow the game to be accessible on various operating systems including Android, iOS and Windows-based devices. Along with the Disco Danny, you can play from a wide variety of other slots and online casino games on these platforms. While at it, ensure to follow our tips to make the best of slot gaming: